I have had a crush on the Na Craga Aran sweater designed by Alice Starmore for decades. That's why when I wanted to knit my husband a sweater back in 2003, I chose (and he approved of) the Na Craga. But the snag was that I was still so new at knitting that I did not understand the importance of yarn weights and gauge. I chose NZ Wool that was far too heavy for the project and I surely did not swatch. Fred has worn that disastrous Na Craga once--in a blizzard while we were snowshoeing at White Pass, WA. I cannot find the picture of him wearing it, as that was before our phones became also our cameras and it is down some buried file hole on my external hard drive. Or maybe even in one of the bins of real photographs in storage. How vintage!
For years I hung the monstrous thing in my office as a piece of art.
Ever since then, I have wanted to make one for myself, so when Starmore had her book Aran Knitting republished in 2010 with the Na Craga sized down, I went on the lookout for yarn suitable for the project. Back in 2011 I wrote it as one of my aspirations here on the blog
Then I found Hampton Fiber Mill on Instagram and became a fan of Michael's--he's a hoot! I think he's recently gone underground, but before he vanished from Instagram, I found out about his DK yarn and knew it would make a good Na Craga. 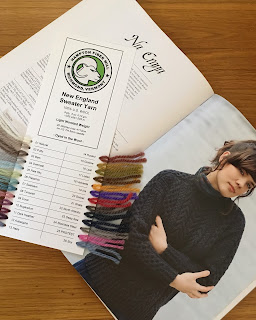 First, I ordered a shade card from him, and quickly decided on the Deep Sea colorway. This was back in March of last year, by the way. 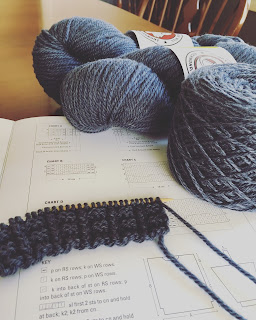 Then I ordered what I thought would be plenty of yarn for the sweater, based on the pattern's suggested yardage. I even ordered just a tad more. Then I set about swatching, only to discover that I needed to go down to a size 5 (3.75 mm) to get anywhere close to gauge. I hated to do that, because it would make the work less fun. Cables already make a tight fabric, and when you're using a smaller needle than you'd like, well, it's a bit of a fight.
This yarn is best knit with size 6 (4 mm) or 7 (4.5 mm) needle, especially when working cables. Size 5 was as far down as I was willing to adjust and that would mean I had to just hope that if I knit the smallest size, 32-34 finished chest, that it would still be an okay fit. 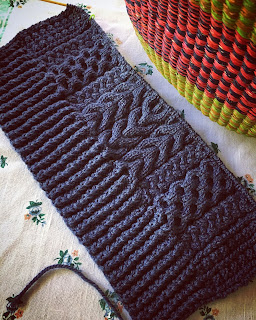 The knitting began in earnest, even though I distractedly worked the rib in a different manner from what is instructed. It's supposed to be more snakey, i.e., 1/1 RC followed by 1/1 LC. I did it with all right crosses. It turned out okay, though, so no big deal. This was in April of 2019. 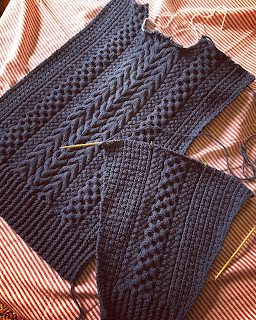 Right about here is where I got bogged down and had to go work on my Whalsay Gansey design. This was in September of 2019, so I think the Na Craga must lave languished in the WIP basket for about four months, because I got back to work on it in January of this year.
That's when I hit another snag. As I was working on the sleeves, it became clear that I was going to run out of yarn. I'm sure now that the tighter gauge was eating up yarn faster. I shortened the sleeves a bit, but it was beginning to look like I would not have enough yarn to knit the collar and do the seaming.
In the picture below you can see that I still have all that to do and with only my swatch and a small ball remaining. I whined about it on Instagram, and Michael says, "It's gorgeous. If you have a yarn emergency, let me know." What??? Well, heck, yes, I let him know, and with little hope that he could help, I asked for a bit more yarn. That's when a yarn miracle occurred. Michael had a full skein and a skein of mill ends of the same dye lot. A year after my initial order! I am one blessed woman, I'll tell you. He sold me the good skein and threw in the one made with mill ends gratis. Sweet! 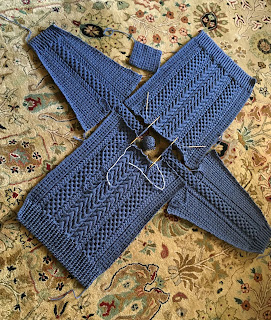 While waiting for the extra yarn, I frogged the sleeves and knit them the right length.
Thankfully the yarn arrived as I was working on the second sleeve, because that's right when I needed it. Presto! I had plenty of yarn for finishing the sleeve and seaming and working the collar. It's so much more enjoyable to knit without worrying that your yarn will run out. I even had enough leftover yarn to knit two cabled hats with it.
Thank you, Michael Hampton! 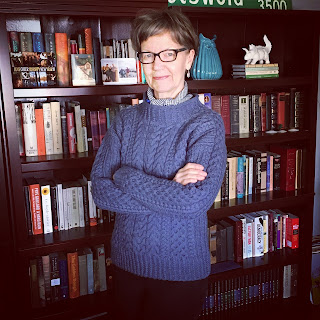 By February 15 I had it all assembled and blocked and, happy day, it fits great!
I love, love, love this sweater, even though it was hard to knit, made my hands sore, I had to take a giant rest, whatever. It was all worth it. My Na Craga saga is complete.
Now I have my eye on some others of Starmore's beautiful designs. Maybe someday I will knit another! 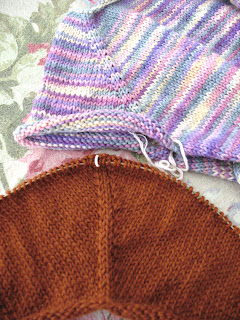 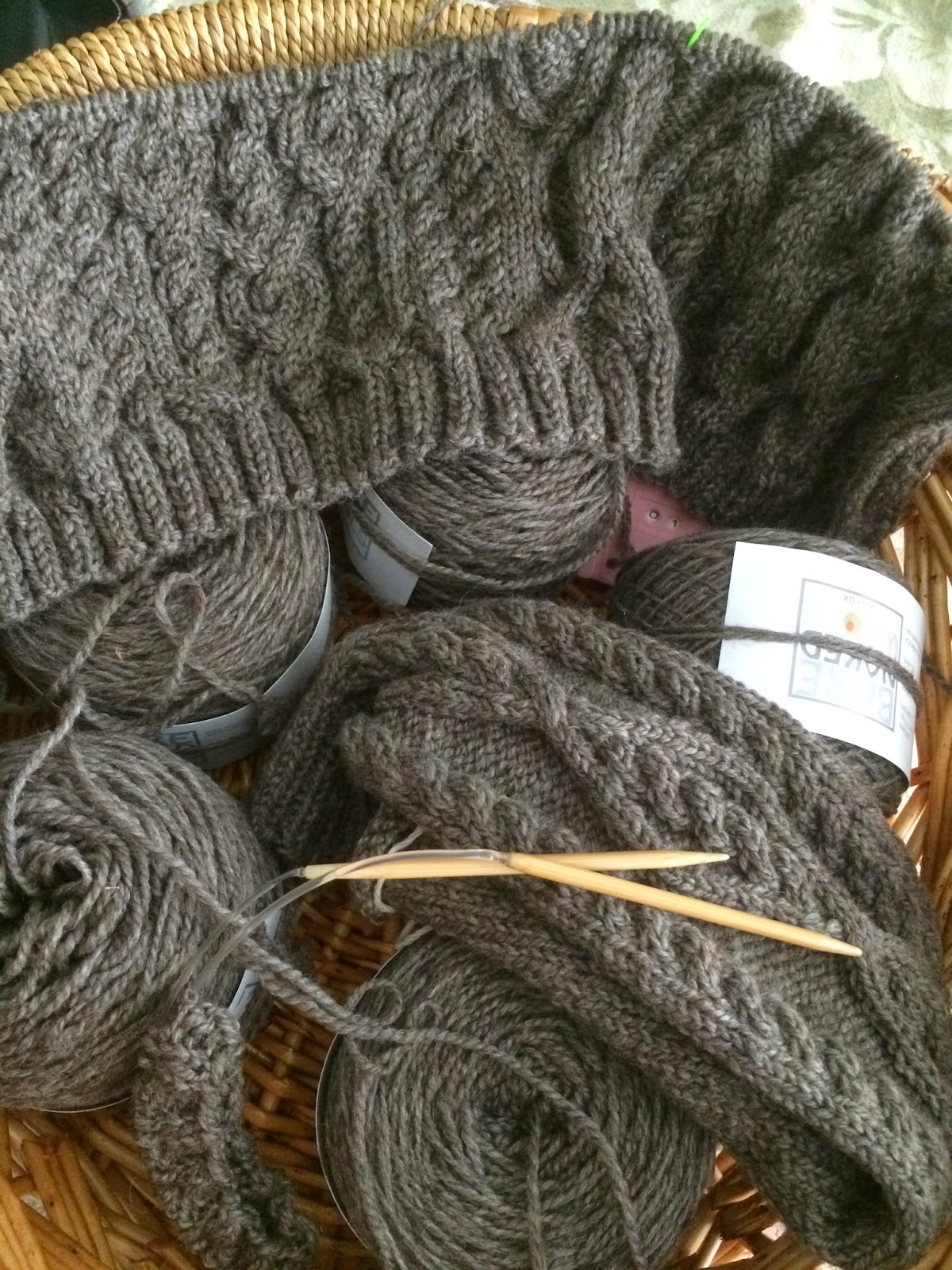