Hi!
Just popping in to say that I will be away from the blog for a couple of weeks while we are visiting with family down south.
I finally started reading up on some Knit and Crochet Blog Week posts today and plan to continue trying to catch up on those over the next few days. For the past couple of weeks I had a design project that had me squarely by the throat and in a mighty tight grip, I might add. I think I have it figured out now and hope to reveal the whole thing around mid-May.

Thanks, as always, for checking in and reading my little blog.
I'll be back soon with some fun posts!

Until then, happy yarn fun!
Posted by Jen Hagan at 11:56 PM No comments:

Sadly, I have to sit this one out. I find myself smack dab between publishing two new patterns and just discovered I have to redo the next one! Full speed ahead!

By all means, though, do what I'm going to do--read as many of the blog posts as you can this week.
Start with Eskimimi, the founder of the event.
Do another thing that I did. Buy one of her patterns to thank her for arranging this every year.
(I bought the Flutter Butterfly Mittens pattern--so pretty!) 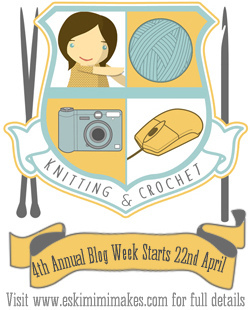 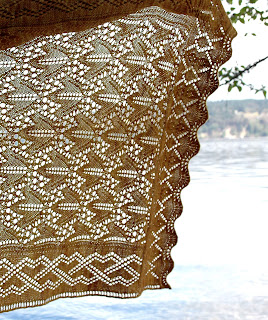 The Ivywalk Stole is released! 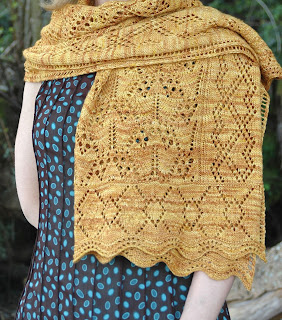 I put together these stitch patterns a couple of years ago and it has waited all this time to be knit. I think it was supposed to wait, because this way I was able to use Wendee's scrumptious Entice yarn. Hazel Knits yarn is one of my favorites, because Wendee is a superb dyer and you can always count on superior quality from her. I have made many items with Hazel Knits yarn and have never ever been disappointed.

This was my first try with Entice, and believe me, you want to knit with this yarn. I loved this colorway, which my daughter Natalie helped me choose back in February when we were shopping at Madrona in the Fiber Gallery booth. Wendee named it Hoppy Blonde because of beer, but I also was reminded of honey and of flaxen locks. It has hints of both yellows and golden browns and everything in between.

This stole pattern is fun to knit because it's a bit challenging in places. I love how the feather and fan edging works great with the Stockinette stitch areas between the diamond shapes of the border, which has a bit of twisted-stitch cable going on. I also love that the ivy leaf pattern had me really stymied when I first began knitting it, but then made sense as I got on to the third rep or so. These stitch patterns help a hand-dyed yarn like this one to shine, because there are plenty of Stockinette stitch areas amongst all the lacy parts.

Thanks to Wendee for the yarn, to Natalie for the help with color choice and with photographing the stole, and to both Natalie and Tracey for getting out the kinks!

This baby is finished!
Here's just a peek before we release the pattern over the weekend. 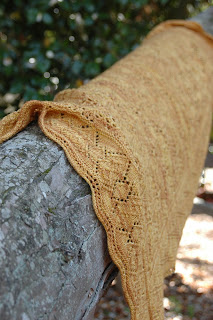 Stay tuned!
Hazel Knits Entice in Hoppy Blonde
Posted by Jen Hagan at 9:43 AM No comments:

Since I boldly posted that I had put 12 WIP's in a basket and vowed to finish them way back in December, I felt I owed you an update on how those projects were coming along. 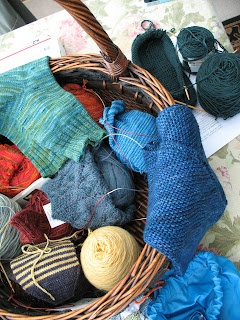 Oh, brother. Hardly a change.
Only one of the twelve has really emerged as an FO. I finished the Bias-Knit Scarf from Lisa R. Meyers' book, The Joy of Knitting (yea!), but then a pair of socks for my sister leaped into the whole affair, because I arranged a swap with her (more on that later). The one crochet project that was here has now been upgraded to a more active basket, which also holds a lace shawl in progress. I took out a couple more projects that were being worked up for designs. I think it will go more smoothly (and with less guilt) if I keep this basket only for personal projects, whether for keeping greedily or giving to someone else.

The biggest confession is that I have let other projects get me sidetracked. You saw some of them last month in the NaCroMo activity. Another is in the upper right corner. Yeah, that's a pair of slippers I just had to cast on yesterday
(more on that later, as well).

I have no willpower. The yarn is my master.

So, you six pair of socks and one scarf remaining in the WIP basket--I renew my pledge to you! One by one I will tackle you. There, I said it here, so I have to do it.

Are you the master of your WIP's, or do they plague you and mutter blasphemies at you from some corner of your otherwise peaceful home? Your confessions will be handled safely and with large compassion here. I understand.

Hello!
Just popping in for a short post to show you that I blocked the big grey blanket. Woohoo! 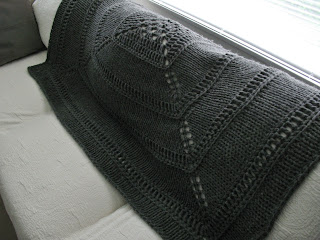 Please excuse the washed out pictures--we have our April showers going full force and right in front of the window on the couch is the best place to get some light. Unfortunately, Big Grey has the window behind her stealing all her glory. She turned out to be 58" x 58"! Much bigger than before blocking, and much bigger than I had figured. 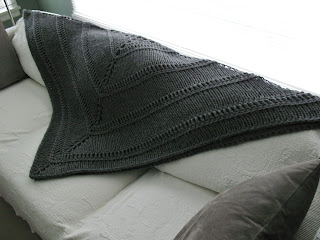 I like her as a giant shawl, too. Ha!

Hey, guess what, folks! Today we travel just up the road to get checked in for a weekend of VK Live and general Seattle fun. I am taking MJ Mucklestone's Scandinavian Color Knitting class tomorrow night and then hearing her lecture Sunday on Fair Isle. I'll report back next week.

I hope you all have a splendid weekend! 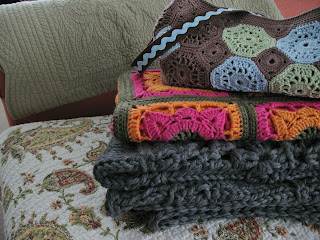 Boy that was a fun National Crochet Month for me.
I managed to finish three of the five projects I set out to do last month, even though I put the last stitches into the third one this morning. Yes, I cheated, but this past weekend was taken with long walks and gardening. We had such good weather I couldn't stay inside and crochet. I just couldn't!

Let's recap: I finished the little crochet bag I started ten years ago and I love it. I would like to make another one but deeper and maybe all one color. The pink/orange/green blanket is one of my favorite pieces ever. Then the fluffy, bulky grey blanket just needs a blocking and it will be ready to snuggle up with on cool mornings. It was fun to start with a granny square middle, pick up knitting stitches around it, knit ten rounds, (increasing two stitches at each corner every other round), bind off, and then work first a round of single crochet in each bound off knit stitch (working three stitches in each corner stitch), and then working the same in double crochet. I just repeated those last two sections (the knit and then the crochet) until I ran out of yarn. I used ten balls of Cascade Lana Grande on size 17 needles and 17 hook. The last two sections had to be shortened in order to make it come out right, but I like it. I'll show you a better picture once it's blocked.

Now I have to scoot off to finish up that knitting project that I was also working on the whole of last month. Hallelujah, it is good to be done, and it will soon be a new Figheadh pattern.
I'll show you soon!