Back in November of 2008 Fred and I were enjoying the annual Lord of the Rings marathon, and like I always do during the event, I got some ideas for designs. Sometimes the ideas have little to do with the film--it's just such a visually pleasing experience that I can't help but get my mind a-going! Well, that particular year a vision of a quirky sweater came to mind. This one was a mock turtle with a cable running along one side of the front. I grabbed my sketchbook (kept on the coffee table for this purpose) and jotted. It became just one of a page full of sketches until I saw the call for designs from Interweave Knits for fall 2009, which came the next month. I thought that the sweater might work for them, so I looked around for the right cable to swatch. IK had as one of their themes for this issue "papetier," so I kept that in mind. I found the perfect cable (and one I'd been wanting to try) in the Vogue Stitchionary Volume Two: Cables (one of my very favorite stitch dictionaries, though I wonder why they didn't block the swatches). The cable is the Seven Sisters. I swatched it in Brown Sheep Lamb's Pride in a lovely light grey. 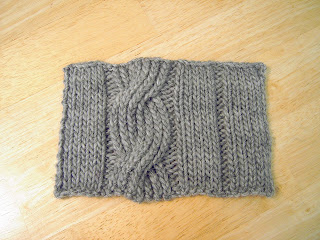 I liked the results and thought it looked like the k5 bands of the wide ribbing had been put through a paper shredder--perfect for "papetier!" Then when I found out that "shredder" is slang for snowboarder, it fit even better. I could just see Legolas wearing this sweater as he scoots across the snowy New Zealand mountains, quiver on his back and long elven locks flowing in the breeze. Well, come on! Legolas would totally be a snowboarder if he were around today. Hey, who knows? He may still be around. Elves live forever unless killed in battle, and I don't think he was...killed in battle, that is. Correct me if I'm wrong, Tolkeinheads.
The mind wanders. Back on track, Jen! Okay, then I sketched the sweater and added all the detail bits and sent it to Colorado and forgot about it. 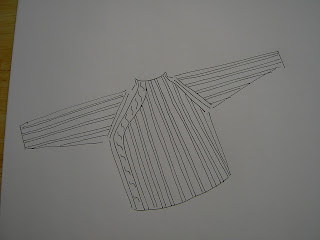 Summer 2009 came around and I got a big, mysterious box of Elann Peruvian Highland Chunky in the mail. No note, no explanation. I asked around. I thought maybe my mom had sent me a BD present, my being a junebug (as my granny called me often). Nope--no one knew from whence this box of goodness came. I even asked Elann and finally got hooked up. I got an e-mail from IK that said that they had gotten things a little out of order and could I do the design up to go in their winter issue? Fine with me! I accepted the job and got busy. A couple of weeks later, the sweater became yarny reality. 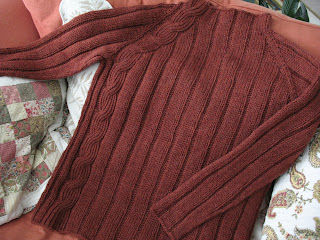 And then it became published reality.

Before the magazine went to print, I was sent the draft for a last read-through (which is rare, and I love that Interweave does this) and was told that they had done a few tweaks. See, I had figured the neck a little wide with my first set of numbers and my sample for IK came out more as a boat neck than a mock turtle. Since the Shredder is a top-down sweater, by the time I realized the glitch with the neckline I was almost done with the thing. Deadline looming, I really had no choice but to forge on. I wrote my draft for making the turtleneck, but IK was concerned that readers would look at the pictures and wonder why their neck was coming out differently than the one in the magazine. A very just point, indeed. I conceded. Meantime, I had started working up one of my own with my draft. I much prefer the closer-fitting neck. What do you think? 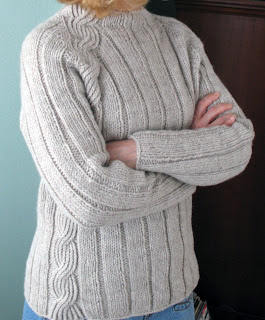 My version is made with Cascade Eco Wool, which I have in delicious abundance. I really enjoyed the whole knitting process of this one better because I never had to spit-splice once! The big fat skeins that Eco Wool comes in makes this possible. The Elann comes in tiny skeins, and while I loved the yarn--also a sproingy, fat, lovely 2-ply--constantly having to stop and join ends was a bit daunting. 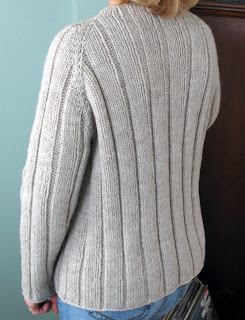 The only other detail I wasn't quite happy with is the way that the raglan shaping so extends out onto the sleeve. You noticed, too, didn't you? Especially on the dude in the magazine. This is because I started the sleeve at no stitches and added from there. I now know that a raglan sleeve looks much better if you start with one third the back number, as I have learned from Barbara G. Walker in her book Knitting from the Top. It's all okay, though, because the Shredder is different and a little quirky, just as I pictured it. I wanted the cable to just look out of place a little, like it was flung there accidentally. I wanted the raglan shaping to be not quite so neat by having the increase at the right front shoulder come after the cable and not before.

Thanks for joining me in my oft-times mind-jumping sharing of the Shredder story. Let me know if you make your own. I would love the feedback.
Posted by Jen Hagan at 11:12 AM 10 comments: 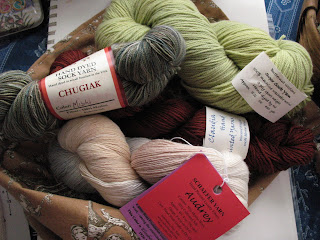 Nope, not a typo. You know you love it. All these yarns are new to me. Starting with top right, I already told you about Shelly Whitman's beautiful Butternut Woolens Super Sock Yarn, and here it is in Beargrass. Going clockwise, you see some Claudia Hand Painted Yarn in the worsted weight in Copper Pennies. This is the only one of these four I have actually put on the needles at this point, starting a little cable lace neck cozy with it. It is sublime. I want to make a whole sweater with it now. Next you see a new to everyone yarn, Schaefer Audry in the Elizabeth Kubler-Ross colorway. Not enough hours in the day and not enough time or I would have already plunged in. Soft and satiny and too yummy. The last is a new to me yarn, Pagewood Farm Chugiak. I'll be crocheting with this and I'll let you know how it goes.

These yarns are just a small sampling of four companies I am very proud to be working with. They are all run by smart, lovely ladies (and sometimes also their men) who are some of the best in our business. I love your yarn, ladies. Never stop yarning so the rest of us can play!

I know no better way to ring in 2010. I raise my needles to you and wish you the best year and the best of yarn play yet!

Oh, and Sláinte!
Posted by Jen Hagan at 1:28 PM No comments: