In this installment, we are discussing the sleeve knitting. 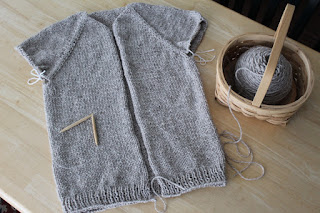 When the body of the cardigan is complete... 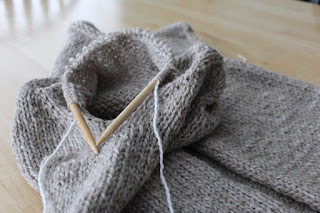 ...you will use your 16" circular needle to begin the sleeves.
First, slip all the stitches from scrap yarn to the 16" circular, as in the picture above. 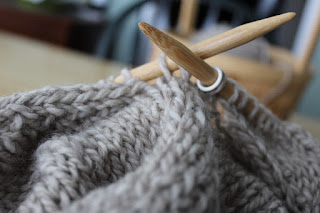 Pick up half (or nearly half) the underarm stitches from the body at the first of this round. Since this sweater I am knitting is the size 36 with bulky yarn, I only have two stitches to pick up here, and you can see them lurking up there behind the right-hand needle tip. 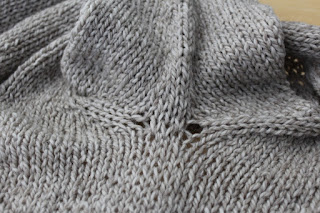 From there I knit across all the sleeve stitches, picked up one more stitch at the end of the round from the body, placed a marker, and knit the sleeve from there in the round. I did not add any extra stitches to the pickup to close holes. The stitches are so loose on this bulky version that I wanted to go a different route. You can see in the above picture that I do have a couple of holes and loose spots here. 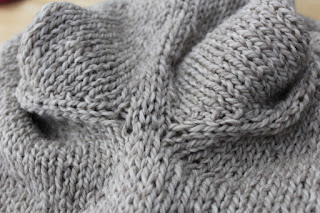 So I turned the work to the wrong side, tightened up the stitches in those spots, and used the yarn end to work some duplicate stitching to further close up the holes. This looks good enough for me. 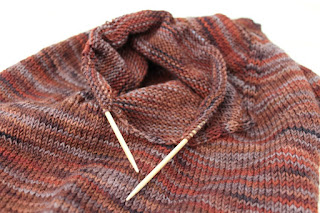 I am also working up another cardigan in size 34 with a sport weight yarn on size 4 (3.5 mm) needles using the 6-stitch gauge version in the pattern. I wanted to show you some differences. Above you see the sleeve stitches on the 16" circular ready for me to pick up the underarm stitches. 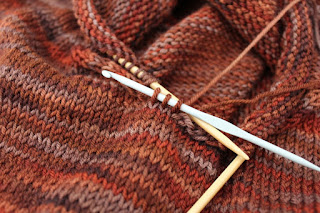 The picture above shows how I joined my new yarn and picked up the leftmost three stitches from the body underarm using my handy tool with a pick at one end and a crochet hook at the other (I love this thing!) 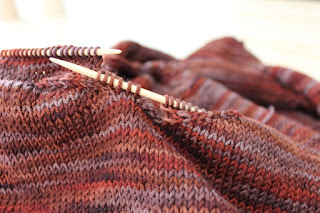 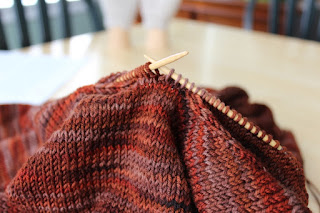 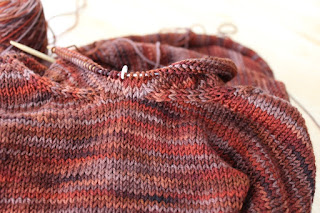 After knitting a couple more rounds, you can see in the picture above that this made the underarm join nice and tidy with no holes. That means I have nothing to do in this area when the knitting is complete except weave in a couple of yarn ends. Good news!

Before we're done with this installment, I want to address some possible confusion in the pattern.

When you arrive at the sleeve shaping you are told to "Work the dec to leave one knit stitch on each side of the marker by working ssk, k1 before the marker and k1, k2tog after the marker." If you are used to working your decreases at the beginning and end of one round, this instruction sounds funny. However, here's the sense of it. I always work my sleeve decreases by starting with the "ssk, k1" at the end of the previous round and the "k1, k2tog" immediately after it. In other words, if the pattern tells me to decrease every sixth round, I work ssk, k1 at the end of the fifth round and k1, k2tog at the first of the sixth round, but only on the first decrease. Afterward each decrease is worked every sixth round (or fourth round, etc.--you get the gist). I find that the decreases lie more in line with one another if worked this way. Lets have a look. 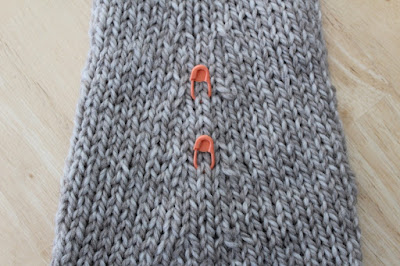 The lower orange marker in the picture above shows the decreases worked closer to one another. If you look to either side of the marker, which lies between the two decrease stitches, you can see the ssk to the right and the k2tog to the left. The ones at the upper orange marker show the difference it makes when you work the "k1, k2tog" decrease at the first of a round and the "ssk, k1" decrease at the end of that same round. The ssk sits higher on the right of the marker than does the k2tog below it on the left. This is why I like working the ssk at the end of the previous round instead of at the end of the same round as the k2tog.

I so hope that these little details will help you with your cardigan project!
I'll be back in part four with some insights about working your button bands and collar.

Note: Bulky sweater is knit using Cascade Eco Wool, color #9008 and the finer gauge one is knit with Schaefer Nichole in the Julia Child colorway.

Welcome back!
This post deals only with separating the sleeves from the body as you knit a top-down raglan cardigan, like the Figheadh Fundamentals Top-Down Women's Cardigan, which is the pattern I am working from. I decided to change my yarn to some marled Cascade Eco Wool from my stash. I have plenty of it and I want to work this cardigan with a bit more length in the body. I can do that because knitting top-down allows you to change the lengths of the body and the sleeves as you like. Bingo! 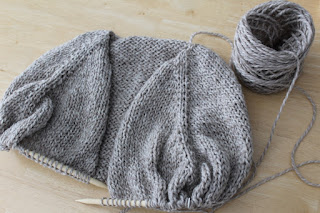 In the picture above you can see that I have completed the upper body of my cardigan. Boy, it went super fast, too! I am getting three stitches to the inch on size 11 (8 mm) needles, which makes the project fly!

At this point, I am ready to place the sleeves on scrap yarn while I finish up the body first. The pattern is very clear on how to do this, but let's add some visuals. 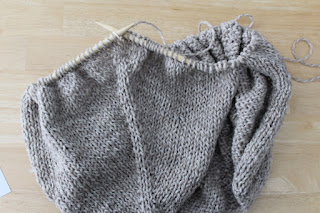 Above, you can see that I have knit across the left front section to the first marker. 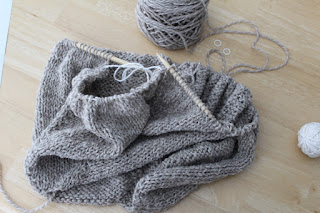 Then, as you see above, I removed the marker and slipped all my left sleeve stitches (the ones between the first and second markers) onto some cotton yarn to make it easier for me to slip them back off and onto a needle later. I always tie a little bow in the ends of the scrap yarn to keep the stitches from wandering off while I'm not looking. I do not like using stitch holders, especially for this. They are too rigid and do not allow the fabric to be manipulated as easily. When you are knitting a big piece like this, you want everything to smoosh. 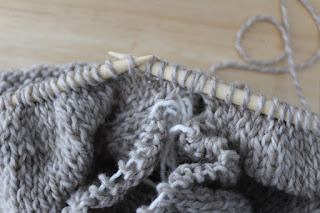 The above picture shows that I have removed the second marker, cast on my three stitches (yes, not many, but remember this gauge is loose!), and am continuing to knit across the back stitches. When I reach the third marker, I will do for the right sleeve what I did for the left sleeve. 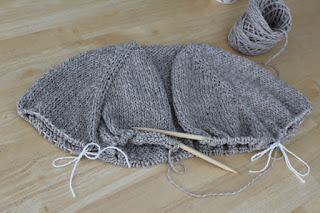 And here we have both sleeves resting on nice, contrasting cotton yarn, all bowed and secure. Only the body stitches remain on the circular needle and now I can knit, knit, knit for a while. I think I'll finish up that marathon of Season 5 of Vera now. I do love a good British mystery!

Thanks for reading. I will be back with some insights on knitting the sleeves of this cardigan very soon!

I recently released a new edit of all the Figheadh Fundamental Top-Down Cardigans, because after being contacted a couple of times about the fact that the very first right-side row of the sweater didn't have enough stitches to actually do what the pattern asked, I wanted to fix that. I also got all perfectionist on the thing and made the increases at the right front edge match the ones at the left front edge. That one was bugging only me, I think. Unless it was bugging you, too, then let me know!

I have also been contacted by a couple of new knitters attempting the cardigan who were confused about how to begin. I would imagine that if this were your first top-down raglan sweater, some things might be confusing. Let's clear this up a little.

In the pattern, I ask the knitter to cast on stitches first and then work the increases and place the markers in the first real row. There are a couple of other ways to do this. 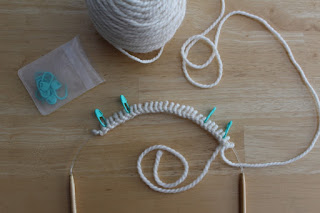 I am knitting the size 36 in the 3-stitch gauge (meaning that I am working with bulky yarn). For this size, I am instructed to cast on 30 stitches. I can see from the way the markers are placed in the Set-up row that I have 2 stitches before the first marker, 5 stitches between the first and second markers, 16 stitches between the second and third markers, 5 stitches between the third and fourth markers, and 2 stitches after the fourth and final marker. Knowing that, I can place temporary markers at those positions before I begin my increases (shown above) just to keep things really straight. Then I can replace the temporary markers with ring markers as I work increases in the Set-up row. 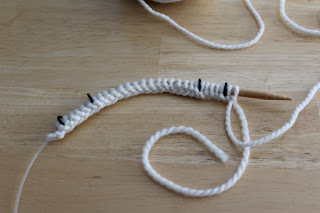 Another method is to place the ring markers in their places as I cast on the stitches, as shown above. 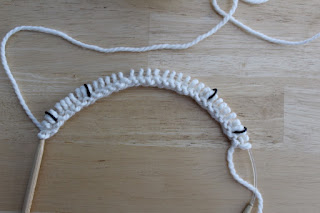 The raglan increases are just one set of increases needed in the sweater. Different increases are needed at the front edges where the collar and then button bands will be. The way that you work these increases determine the shape of the neckline. Most of the Fundamental Cardigan patterns have options to work a crew neck or a V neck with different increase sequences for each type of neckline; however, the men's version has only the V-neck option. In the crew neck shaping, only a few sets of increases are worked at the neckline every right-side row until the piece has 3.5 to 4.25 inches of depth (depending on size) and then the front is worked from there with no more shaping. In the V-neck shaping there are more increases worked at a less frequent rate, but they are worked along the entire depth of the armhole. From there, the front edges are worked with no shaping, as with the crew neck option. 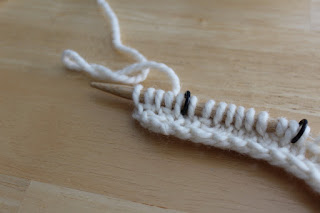 The photo above shows the right front neck edge after increases have been worked in the first right-side row after the Set-up row (which is what I just added to the new pattern edit). You must work two kf&b increases (knit into the front and back of the same stitch) one after another just in this row because there are too few stitches to work them otherwise. This increases this section from 3 stitches to 5 stitches. 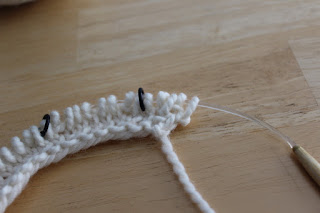 Above shows the left front neck edge, which looks a little different, but has also increased from 3 stitches to 5 stitches. 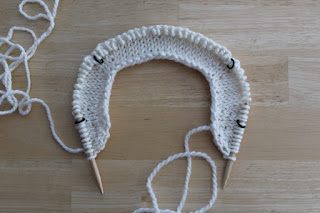 Here is the whole shebang after working a couple more right-side-row increases. Now it's starting to look like something. We now have 9 stitches before the first marker and 9 stitches after the fourth marker and we can work the neck edge increases as they should be worked--a couple of stitches away from the edge. That way, when it comes time to pick up stitches for the button bands, the little "purl bumps" made by the kf&b increases are positioned away from the edge, making it easier to pick up into those edge stitches later. 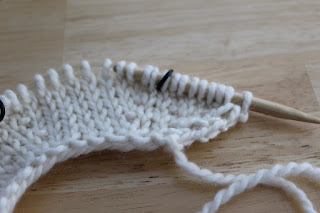 As I am working another of these sweaters to formulate these pictorials, I can see some little tweaks that will make the pattern better and so (sigh) there will be a need for a fourth version. Until that is ready, be assured that there are no found errors. The current version will certainly guide you just fine.

I hope this post sheds some light on how to get started on your top-down raglan sweater. I'll be back in the next post with help for the next part of your sweater--separating the sleeves from the body.