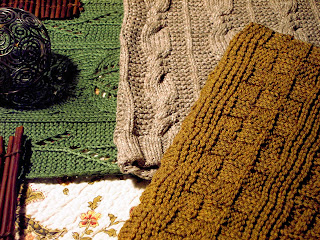 Thank goodness I have help in these and more talented people. Maybe it will help me not to lose months of my life like I did in 2008. Not only did a friend have to sell her farm and move to a different state and close her fabulous business (breaking my heart), all without my even having the slightest hint, but I even managed to go a whole 15 months without going to the dentist. I'm a good dental patient! I started wondering lately why it seemed like too long since I'd been to the dentist, and not having gotten that call reminding me, I was afraid I'd missed my appointment. Yeah, I did--in June 2008!

Mercy. Big wake-up calls here. Thanks to Fred, Sonya, Shirley, Bonnie, Beth, Betsy, Meredith, Tracey, Andrea, Sue, Stormy, Terri, and Kelli, I might not lose time this year. I might actually have some time for living in between working. Nice.

I'll be back next post to tell you about the new patterns we released recently. Thanks for stopping by, and take it from me--take time to pay attention to your friends and your health. Life's too short already.

Email ThisBlogThis!Share to TwitterShare to FacebookShare to Pinterest
Labels: life

Princess Mitts Fix and some thoughts

Thanks to Angelika for sharing a wonderful post on the Lorna's Laces blog last month. Also thanks to E. J. for sharing yet another wonderful post from the same blog (maybe I should bookmark the blog and read it more often, you say?) This and some happenings on Ravelry have inspired me to say a few things about designing. The five of you who actually read my blog regularly will wonder why I am suddenly becoming so wordy. If you're curious, read the whole post. If you're here for my Princess Mitts fix, scroll down.


If you read the first LL post referenced above about what makes a designer, you'll understand my further comments. I'm one of those hand knitting designers who does everything every step of the way and is trying to make a living doing it. I am no better or worse than all the other designers--from those who design as a hobby to those who have the freedom to conceive fantastic ideas while everyone else does the other work (because thinking IS work--look at how many people don't put forth that particular effort). I come up with the ideas, try them out with needles, yarn, tools, etc., do the swatches, rip, try again (as many times as necessary), write the notes, type up the drafts, do the math, make the charts, draw the schematics, write the line-by-line, edit, edit some more, make the sample, block the sample, photograph the sample, and on and on. Whatever it takes.

Thank goodness I do have help in the form of two technical editors, a photographer, sample knitters and testers, eight reps, and soon a part time assistant (hallelujah!) but I have to arrange all of that myself and pay them all myself out of the modest profits of being a designer with a pattern line and a few freelance design jobs now and then. I keep the books, print the patterns, sleeve the patterns, mail the patterns, do promotion, and I'd better stop here because I know you're tired of this list already.

I also have a wonderful partner in Fred, who does all of our site maintenance and ad layout and so much more--anything I need help with that he has time to help with after his own full time job. Don't misunderstand--I am not complaining, just telling you how life really plays out. I LOVE my job and am thankful every day that people like my designs well enough that I have been able to work at it full time for the past 15 months. I can even pay some of the household bills now, but not the mortgage. Hopefully, that'll happen sometime in the future.

Because I am so involved with every step of every pattern I publish, it really bugs me when I get any negative feedback. Sure, I've learned to weed out the worst and the best and focus on the reality in the middle, but if someone is truly having trouble with any of my patterns, I want to know why. Here are just some of the reasons I've noticed folks having trouble with patterns:

1. Knitter has paid no attention to the skill level of the pattern and is in over her/his head.

2. Knitter did not read through the pattern before beginning, especially in regards to notes and special (perhaps difficult) stitches, techniques, gauge and suggested yarn weight.

Here are some consequences of the above that I have also noticed.

1. Knitter assumes the pattern is "wrong" instead of just maybe different than what they may have encountered before.

2. Knitter assumes he/she is "wrong" just because he/she may not understand a certain technique, is having trouble reading the pattern, or because there is actually an error.

3. Knitter doesn't check for errata before ranting to anyone and everyone who will listen.

4. Knitter rants to anyone who will listen before contacting the designer (if designer has given contact info).

I LOVE hearing from knitters who find errors in my patterns. I want to get that on my errata page ASAP. I don't mind hearing from knitters who need help with any of my patterns, but the best place to get help with basic knitting techniques is your local yarn shop. I cannot give that kind of help in an e-mail or even over the phone. Some things just take good old-fashioned one-on-one personal guidance. I learned to knit from a real person. It's the best way. If you are too far from any yarn shop, find a knitter and befriend him or her. If not even that is at your disposable, there are many fabulous Web sites and videos to help you.

Okay, now that all of that is off the chest, I'll use one of my most popular freelance designs as an example of all I've said so far. My Princess Mitts pattern in Clara Parkes' The Knitter's Book of Yarn has thankfully received a lot of attention, especially on Ravelry. (If you are a knitter or crocheter and you don't know about Ravelry, you're really missing something--go and get in line to join.) I designed the mitts in the spring of 2006, and the book came out in the fall of 2007. That's a big passage of time. I learned a whole heck of a lot during that time. Almost from the minute the book came out, and certainly after Potter Craft, the publisher of the book, offered the mitts pattern as a free instant PDF download, I have heard complaints. The comments range from "hated with every fiber of my being" to "not fun" and thus the weeding and focusing I referred to before.

The fact is, there is nothing wrong with the pattern. The fact also is, the pattern could be a lot better. No, the thumb gussets do not match. That does not make them wrong, but it does make them asymmetrical.

Enough intro. Let's get to my fix. 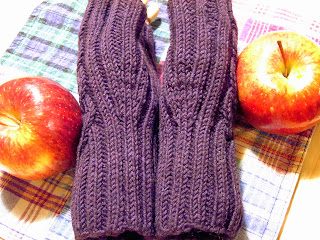 After months and months of watching folks making these mitts and not having enough time to go back and look at the pattern, one day last month I received a really nice e-mail from a knitter named Eileen who wanted to make them for her dear friend. She told me that some of the details seemed off and asked for my help. This was the first time anyone had approached me directly with such respect and so politely, so I was inspired to take some time and make a pair myself to see just what the problem was. Here's what I did to make the pattern better (see Emily modeling these mitts in the previous post).
1. I centered the two sets of stitches on the 2 circulars by starting and ending each set of 2/2 rib stitches with p1. I do not like starting a rnd with a purl stitch, but it works better.
2. I worked the cuff for 20 rounds. I like the longer cuff.
3. I put the decrease necessary at the beginning of the cable into the chart, as well as the increase at the end of the cable. The 2/2 rib is an even-numbered multiple but the cable is worked over an odd number of stitches, so something has to give. This was put in as a note at the very beginning of the pattern in the book, but a lot of people didn't read it, causing confusion (and sometimes agony).
4. I made both thumb gussets identical by working the increases to either side of the "k2" closest to the juncture between circular needles. See how they match in the photo above?
5. I increased only 8 stitches (4 increase rounds) to either side of the "k2" on each thumb gusset and only cast on 4 stitches across the gap after placing the thumb gusset stitches on a holder. This made 16 stitches for the thumb after picking up the 10 stitches on the holder, 1 stitch at each corner to prevent holes there and the 4 stitches from the cast on. This is plenty for this DK weight yarn and makes a more comfortable thumb.
If you have any questions, send me an e-mail at yarnworks@figheadh.com. 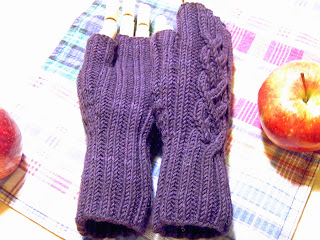 Please excuse my very light photos. The sun is shining here today, and now I am going to go and open up all the blinds and let it shine!
Happiest of knitting to you all and let me hear from you. I must have the mutest readers in all the world. (Except you, Emily, my lovely chatty one!)
Thanks for reading. :-) 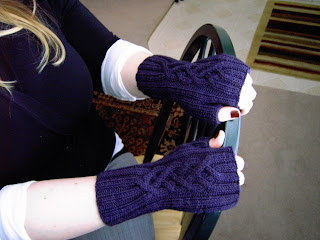 It's been daughter-visit time around here lately. Fred and I were pleased to have Natalie in January and Emily last week here to each spend a week with us.

Emily sweetly posed for me in two recent FO's. First is a pair of my Princess Mitts in Hazel Knits Artisan Lively DK in Plum Glacé. I have a lot more to say about these, but I'll save that for another post of its own. 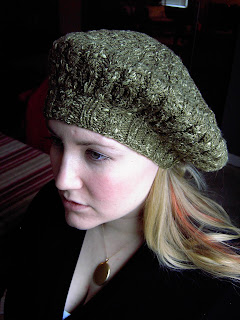 Here is our lovely Emily in my Cabled Tam from VK Holiday 2008. She wears it well, no? Love the strawberry-red streaks, milady! 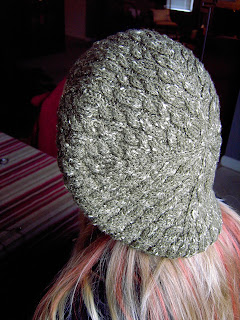 ...and from the back. Yes, it's a roomy tam, but the pattern warns of its 12" diameter. I read a post from a smart Raveler who adjusted it down a bit by working four sections instead of five. Great idea! Try that if you like a more beret-type hat.


We all had a marvelous time during Emily's week with us. Our visit left me personally with several lump-in-the-throat songs in my head, scrumptious skin care products, a saucy manicure, and the intense urge to dance through town with a crowd of women. Yeah, the Emily does not leave you untouched. A week with her is a reminder of what is joyful and glamourous in life. She's a force, I tell ya! (I love you, honey!)

As I hinted, I'll be back with a post all about how I reworked the Princess Mitts (finally) and about other WIP's and last but not least, six new Figheadh patterns.

Now back to the needles and some softer-than-believable alpaca yarn. I hope you're enjoying your present project as much as I am!
Posted by Jen Hagan at 12:58 PM 1 comment: