Brackenhill Shawlette: At the Border! 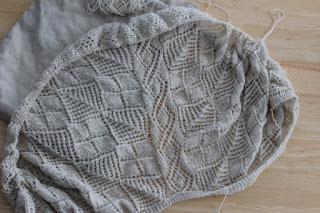 Hurrah! I finished with the main body of my Brackenhill Shawlette and am ready to start the border!

Remember in this post I raved about how perfect that first skein of yarn was? Well, the second one was not so well-behaved. I encountered some spinning irregularities and a lot more guard hairs. While I don't consider it a problem, the irregularities did make for some interesting spots in the lace.

You can see some fat, fluffy spots in the next three pictures. Look closely. 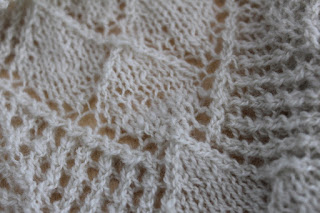 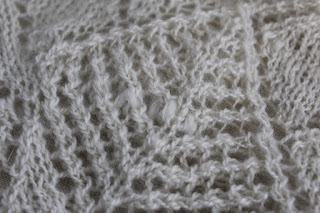 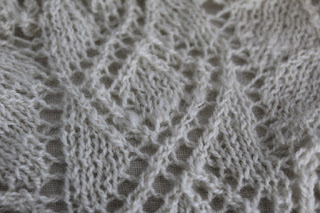 I could have tried to pull some of it out, but I did not want to tamper with this delicate cashmere. Some of it will relax when I block the shawl and will be hardly noticeable. 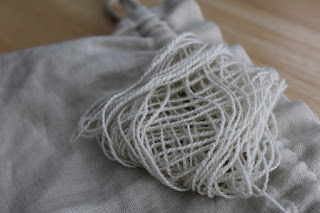 Here's what's left of the second skein. The third skein is on the winder and I can't wait to start the border. I wonder what surprises that third skein has in store for me?

Here are a couple of other notes from working the shawl to this point. I did not find any errors until row 127, section five. I will need to add a correction to the pattern, because instead of stating "k51" in the middle of that row, it should state "k53." I know exactly how this happened, too. Row 125 had to be edited because the stitch count was not ending up at 327 as it needed to be for the border. I decided to take out the last k2tog before the center panel and the first one after the center panel and replaced them with "k2" to make it add up. This made each of those two sections' counts arrive at 20 stitches instead of 19, unlike every other pattern repeat along that part of the row. Those two stitches caused the glitch.

Also, I carried on with my plan of not looking at the chart the whole time! I know you're thinking, "So what?", but I NEVER do this. I also played a little game with myself. I never advise this, but since I kinda know the pattern, it was safe for me. I only looked at the page I was knitting from and did not peek ahead. It had been long enough since I'd last looked at this pattern that it was enough of a surprise to just wait and see what came next. Would I have completed another section? Was there more? What came next? Oh, so fun! When I finished section five, I was overjoyed to see that the border was the next step. I figured I had at least another section of lace left to work. The shawl is so deceivingly small before you block it, you see.

I got to this point faster than I thought I would because I've only been working it on Sundays and a little on weeknights since it is a personal project. Work knitting has to take priority.

Hopefully pretty soon I will be back to show you the blocked shawlette!

The following is by no means a complete tutorial, but a technique I have come to love for attaching patch pockets to knits. I have included links to a very reputable site which can help you further.

Since the new Figheadh Adcock Aran Cardigan runs in size from little folks to big folks, those pockets need to stay put. I don't use my pockets all that often, but the wee ones are known for putting all manner of treasures into theirs. Let's make sure those trinket-catchers don't come loose!

Instead of just a hasty whip-stitch method of attaching pockets, I first line up the bottoms and sides where I want the pocket to reside and pin it in place--at least at first. Then I work a invisible horizontal seam across the bottom of the pocket. All this means is that I catch both sides of a body stitch, catch both sides of a corresponding stitch on the pocket, and repeat from right to left until a have worked all the way across to the other corner. Then I draw the yarn end to the inside and weave in later. Also, at this point I remove the positioning pins--they are in my way!


For the side seams, I simply work good old mattress stitch (or invisible vertical) from bottom of pocket to top, being careful to line up the two along one vertical column of knit stitches on the sweater body and on the pocket. 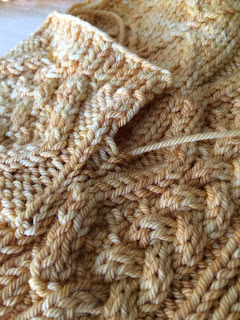 Then I work mattress stitch on the other side of the pocket, weave in all the ends, working an extra pass or two at the upper corners (where little hands can stretch and stretch), and there we go!
Pockets that stick!

All pictures above are knit in Mrs. Crosby Plays Steamer Trunk, which is a sturdy superwash wool yarn. The wonderful color is hand-dyed Golden Butter.