It's that time of year for frantic finishing to get those gifts wrapped up in time.
I just cast on one more myself. It's an easy hat, but with only about five days to finish it, I am a little nervous. I want it to go into a certain person's stocking. We'll see!

If you have one more little gift to make and you have a couple of free evenings remaining before you need to wrap up your special gift, consider these easy knits:

The Figheadh Fundamental Watch Cap
(especially in the bulky!)

The Learn to Crochet Cowl

I hope this helps calm your frenzy, at least in the knitting and crocheting department. I can't help you with all the baking and shopping. Give yourself a breather on that.

Happy Holidays!
Posted by Jen Hagan at 12:54 PM No comments: 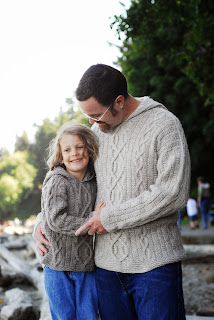 As modeled here by our good friend Keith
(shown here with his daughter Faith in the Iain, Jr.),
the Iain has been one of my best-selling patterns.

I first conceived of the idea to design an Aran pullover that had the features of a hoodie sweatshirt. I also wanted to play around with placing cables on a background of other than reverse Stockinette stitch. I was working on this design back when I did a lot more substitute teaching, so I even polled some teen boys in my classes about how they would like such a thing. They were all full of approvals. The thing was, in 2008 when all of this came together I was better at imagining things like this than actually writing them out clearly. Thus, the first incarnation of the pattern, although edited and tested most proficiently, was not the best and has been causing knitters a certain amount of frustration all these years.

I have wanted to fix this problem for a while now, but other matters kept pulling me away. This past summer I decided it was time to get to work on it. First, I tackled some of the main issues and re-checked all the math. Then I went on Ravelry and read all the knitters' notes who had knit the Iain. That was painfully entertaining. There was a time in this newish career of mine when this would have made me very anxious and even downright mortified. Thankfully I have tempered my tendency to be upset and now I take it in stride. It is a nasty aspect of the ego to hold on too tightly to what it loves and thus to be insulted when it is found to have been in error. Ego, be silenced! Mistakes happen. And this is knitting, not brain surgery. Peace, be still.

All philosophizing aside, I am grateful to all the knitters on Ravelry who took the time to record their less-than-happy experiences knitting Iain. You helped me so much! I took it all as a giant wish list and set about improving the pattern. The main charts are now all in one place and with all the line-by-line included on those. The V-neck charts include one whole pattern repeat so that you can see how the neck shaping relates to the entire thing. Not only that, but the neck decreases now all allow for the center cable to cross just before the V-neck begins. Before, only one size did this nicely. As it happens, that was the size I knit as my sample and so it didn't occur to me that the other sizes needed to have this feature. Not only all of that, but the hood charts are drawn much more clearly and are now correct (as much as anything can be correct that is fashioned by humans). They also include one whole pattern repeat after the shaping is complete. The text directions also give a lot more help in the hood section.

Could I have included more in the pattern update? Sure! I could have written out the entire sweater, but it's now sitting at 20 pages because of all the charts. That's enough. This pattern has always been classified "experienced" level knitting. In that regard, I expect the knitter to be able to handle some chart reading without always needing line-by-line to go with it. The first section of the pattern is written out (the lower body) and by the time you knit up to the armholes you should be acquainted enough with the stitch patterns to read your knitting and follow charts from there on out.

Here's what I do. When knitting a complex pattern, I do not divide my attention. There is no music playing, nothing on the TV, no one else in the room. There is just me and my knitting, which can be very zen and conscious. We knitters have the opportunity to practice being in the now every day. Just me and my yarn and needles. So simple. So calming.

Uh-oh. Philosophizing again! Okay, I hope this update either helps you with your Iain project or encourages you to start one. Make one for yourself!

Now, to get busy on making the same changes to the Iain, Jr. Whew!