In trying to clean up my yarn stash over the past few months, I have been reminded of all the partial skeins of sock yarn I have in there. Oh, mercy! I used to be more of a sock knitter, but in recent years I let that slide a bit. A couple of years ago I separated some of the sock yarn leftovers into like colors to maybe make something with them. I am formulating a post with a list of great scrap sock yarn projects, some I have done myself and some I'd like to do. While I'm formulating that post, I'd like to show you what I recently completed with one of the groups. 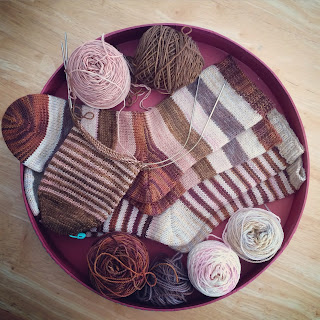 I had these six partial skeins grouped because I just love the browns, creams, roses and rusts together. All of these were used in various Figheadh pattern samples and there was enough left over to really accomplish quite a project. When I started to work with these, I just thought I would make a couple of pairs of toe-up socks. But once I was done with the second pair, I realized there was enough for a third!

The first pair (seen above on top of the pile) was made with all six yarns. Once I knitted the toe in one color, I began ten-round stripes with the rest, returning to the toe color for the heel, mirroring the same sequence on the leg as on the foot, and then finishing the cuff ribbing with the same yarn as the toe and heel.

On the second pair (seen above under the first pair), I used one yarn for the toe, the heel, and the cuff ribbing while alternating two of the other colors in three-round stripes on the foot and leg.

In the picture above, you can see the partial third pair on the needles. It was worked almost totally with just two of the six colors in two-round stripes. I say almost, because I ran out of the brown on the last of its stripes and had to use another of the browns for one half round! You can't even tell. 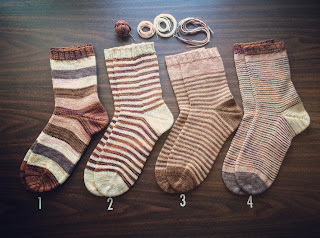 Here are the finished four pairs of socks made with the six partial skeins--yes, four! After that third pair, I weighed the remaining yarn and determined that if I was careful, I could squeeze out another pair. The fourth pair was by far the trickiest, and I should have made them two-at-a-time the official way. Instead I made them wacky two-at-a-time. That is to say that I knit to a certain point on the first one, then knit to that point on the second one on a separate set of circulars that said they were the same size (liars) and back and forth like that to the end. Yeah, they are not the same size. But that's okay!

That fourth pair was knit with one color on the toe with a color band in color number two before working one-round stripes with colors three and four. Then color five made the heels, and the same little band with color two appeared just before the cuff ribbing, which was knit with color number six! You can see how much yarn was left when all this was done above the four pairs in the picture above. 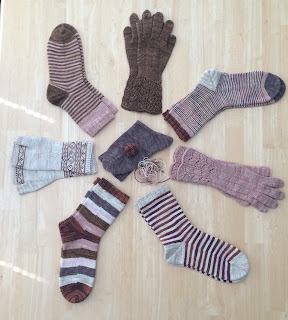 Here's a shot of the four pairs of socks together with (almost) all the Figheadh samples made before those. Bear with me--lots of info!

Clockwise from noon, you see the Beechbone Gauntlets in MacKintosh Iona Fingering in Safari; then socks #4 made with all six; then another pair of Beechbone made with Sanguine Gryphon Eidos in Panchea; then socks #2 made with Fleece Artist Basic Merino Sock, Spirit Trail Fiberworks Alexandra, and Fleece Artist Merino 2/6; then socks #1 made with all six; then the Ironwork Mitts knit with Fleece Artist Basic Merino Sock in Ivory and Spirit Trail Fiberworks Alexandra in Honeyed Plums; then socks #3 made with the Mackintosh and the Sanguine Gryphon; and in the middle is one sock made for the Fundamental Toe-Up Socks pattern that was knit with Plymouth Happy Feet in color #3. The sixth yarn was Fleece Artist Merino 2/6 in Orchid, which you can see as the lighter stripe on socks #2. I can't show you the Figheadh project it was used in, because it's still in progress (aka secret).

Note: Many of these yarns are no longer available, but please go and see the new yarns offered by these lovely companies!

This was such a fun project! I posted the progress on Instagram and when I asked for a vote, they chose socks #2 as their favorite out of 45 votes.

How about you? Which is your favorite?

When I designed the Astoria Wrap for the Knotty Knitters Calendar, I was so smitten with the cable and lace stitch pattern combo paired with a pointy garter stitch edging that I had to take it further... 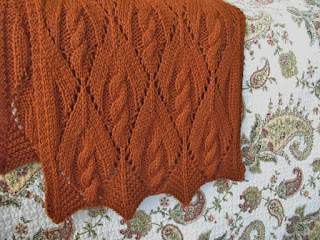 ...and make it a cowl as well!
The cowl begins with the garter stitch edging and then morphs into the cable and lace pattern. I mirrored the edging on the bind-off edge and after a bit of tweaking got it to work.
Then I pushed it a little more and made it a bigger cowl that double-wraps around your neck and drapes its pointy edging all over the place. And that's how I made my favorite cowl of all time. Seriously. I love this thing. The blue small one and the brown big one are both made with Malabrigo Worsted, one of my all-time favorite yarns. You can see why I love this cowl, what with all the favorites going on here.

At first I just made the cowl as a fun project for myself, not planning on ever publishing it. But every time I wore it, I got the nicest compliments, so I took the hint.

Now it's a real, live pattern all its own! It's called the Courtly Cowl, because it looks kind of court jester to me, but also kind of queenly.

Look at how many ways there are to wear the smaller version: 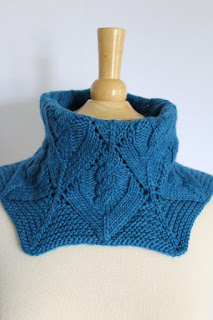 Neat, tidy, and queenly with just the lower edge showing... 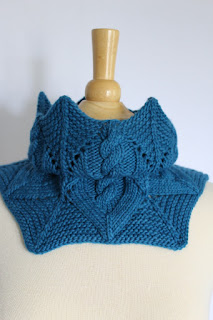 ...or pointy edging peeking a little at the top and bottom... 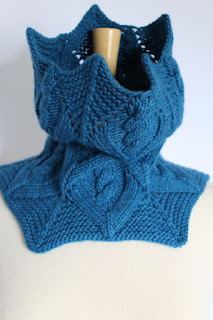 ...or all-out crazy and jesterly!

This blue one is the deep version. Meaning there are two versions of each cowl advised in the pattern. You can make the small in a short version (shown below), the small in the tall version, and the large cowl in either short or tall--you decide.
If you'd like to try the Courtly Cowl, head on over to Figheadh and grab one for yourself. Choose your favorite soft and cozy heavy worsted yarn and get to stitching. I hope you'll let me know how you like the project if you do make one.