I can't believe it's been four weeks since my last real post. Gosh. The Monday ones don't count--that's just a tidbit. Lots of knitting, lots of designing, lots of magazine and book submissions. I've done a whole lot of knitting that I can't show, but here's some I can. 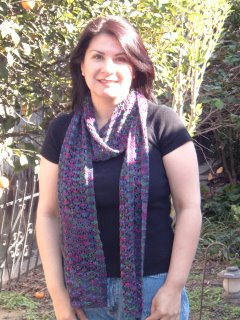 First of all, something someone else knitted--here's the absolutely lovely Irene and her bodacious Mavis scarf! She tested the heck out of that one--it's at least 60" long. Isn't it beautiful? That's Cherry Tree Hill Supersock in Quarry.

You go, Irene! Thanks so much!

Now I shouldn't get you while you're gazing at all that loveliness, so shield your eyes, cuz these sox are... 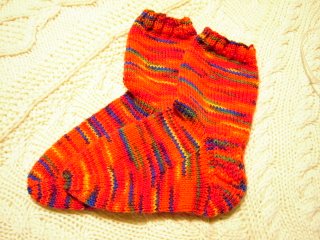 Bright? Woodya say? I finally knit the other sock of a pair I started for the first grandson, but did not get done before he outgrew them. Thank goodness he had a little brother. I hope Declan likes his clown socks. That's Schachenmayr Regia Color (boy, you can say that again) in color #1937 (hey that's the year my mom was born, but I don't think she'd go for some of these) on size 1 needles. I did an "old school" heel (as another blogger called it)--the one in Katharina Buss's Big Book. Aren't the toes pointy? I had to make the second one just like the first, even though it wasn't great. Now that I look at it, though, the one in back is less pointy--must be the second one. Lesson--do not wait months between socks! 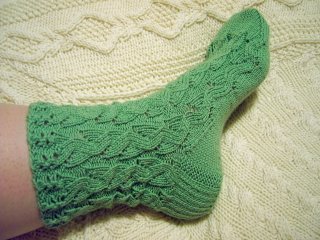 Then here's one McGuinness Branch in a solid so the pattern can be seen. The pic on the site doesn't show off the stitch pattern nearly as well. I gotta tell ya--this sock is more comfortable than any of my socks made with any sock yarn. It's Dalegarn Baby Ull in the lovely frog #8523.
French heel, wedge toe.


Thanks for visiting! Y'all come back now, ya here? (Waving wildly.) I won't leave you hanging for another month, I promise!
Posted by Jen Hagan at 7:32 AM No comments: 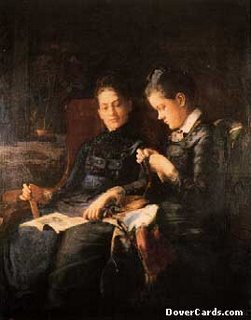 But here's your link fun for the week!

I can't believe I just found the Knitter's Bookshelf. Now I'm in trouble.

After knitting socks all week, I'm ready for something not so tiny...but I only thought I was knitting tiny. This is tiny knitting!

Alas, I always have to throw in some fun. It's fiber--shoelaces!

Tie your shoelaces!
Posted by Jen Hagan at 8:24 AM No comments: 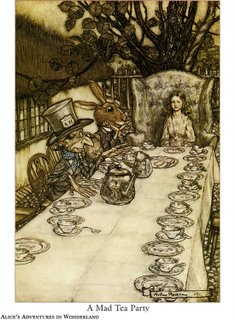 Probably better than a Mad Tea Party (thanks to the fabulous Arthur Rackham)...this week's links!

First, another site for lots of knitting info.

Knitting terms in Eng/Fr/Germ/Sp, for those who have their mitts on some patterns from other countries.

While I'm on that subject...Japanese, anyone?

And have a look at these crazy, wonderful bags.

Wanna make a monster? Go here.
Posted by Jen Hagan at 10:57 AM No comments: